Starting this Sunday, July 23rd Washington drivers will have to put down their phones or else face tougher penalties under a new distracted driving law.

Texting or holding a phone to your ear is already against the law in the state, but the new measure now prohibits anything else that requires drivers to hold their electronic devices while behind the wheel. That means no reading text messages while driving, scrolling through Facebook or Instagram, or watching a quick video while stuck in traffic or sitting at a red light.

Under the measure, “the minimal use of a finger” to activate, deactivate, or initiate a function of a personal electronic device while driving is still allowed. To enforce this, police will have to use their judgment. State Patrol Trooper Rick Johnson, sees it this way: “The idea is for you to activate your phone with one touch, so you don’t have to look away from your windshield to dial 10 numbers, to make a phone call.” Typing a map address while in traffic, now common behavior, will be treated by many troopers as a violation, he said. Handheld phone calls to 911 emergency services is still legal.

The standard traffic fine of $136 would apply to a first offense but would increase to about $234 for a second offense. These offenses are reportable to insurance companies, which could raise rates like any other moving violation.

Plus, another section of the new law also says a person who engages in “any activity not related to the actual operation of a motor vehicle” — like eating or putting on makeup — is subject to pay an additional fine of $99. However it is a secondary offense and only applies if an officer catches a driver being distracted while committing a standard traffic offense, such as running a stop sign because their coffee spilled. 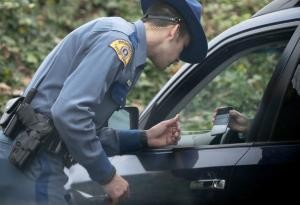 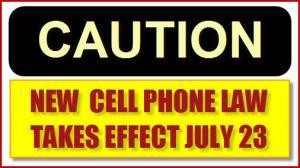